One Year in AP: Moving On (Week Six)

Whether that is a skill or content, I want to know if they know it.   I no longer think it is acceptable for me to guess or get a feeling on whether or not they know it. Getting the students to know if they know it is down right hard, but I am really attempting to get to a point where the students can recognize their understandings or progress on their skill levels and content knowledge.  Therefore, the purpose of this year of reflection is see how I make progress towards these two goals and elicit feedback from staff, students, and hopefully people who follow along in the journey.  You can read how last week went here.

Week Six: Answer the Question
My content instructional goal this week was centered around how empires grew and rose to power.

My skill instructional goal was centered around the document based question. 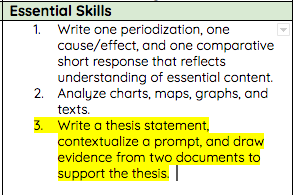 This week was a little short because of the religious observation of Rosh Hashanah. I started the week on a positive note.  To do this, and review content at the same time, I had the students play Classical Era pictionary. It’s fun and sets a good mood for the week. All of the pictionary words were technologies invented in Classical China or before.  For instance one of the words is paper.  The activity gives memory cues for the students to add to their essays later on. Furthermore, it builds foundational content knowledge about Han China.

On to the skills. I was so proud of their ability to pull evidence from readings this week.  They were able to correctly identify key pieces of evidence to support claims.

The students wrote contextualization statements nearly everyday this week.  In addition to their statements, they analyzed primary sourced documents and pulled evidence to support claims.

Again, they practiced writing thesis statements everyday.  This was based on the feedback from last week’s setback.

I also threw in content checks every day.  One of checks was a twelve card puzzle on the methods of political control.  The students had to sort which method of political control went with each empire. It was incredibly hard at first, but watching the students work through the content and hearing their dialogue with group members allowed me to gauge how much they knew.  Slowly, they are start putting together the ones they know and then the puzzle comes together.

To explain the activity a little more, each of the edge pieces had a fact that were outside of the time period.  So Mali, Inca, Hagia Sophia, and Muhammad were edge pieces because I haven’t covered it yet.  I quickly saw which students needed direction because they were pairing Hagia Sophia with Qin and Han. But over all, they were very impressive and proved their content knowledge.

Explanation of the Evidence

Worlds better (pun intended (it’s a world history class))!  Their ability to add context improving daily. The sentence starter I used helped them address the skill. From the practice and peer to peer editing,  they have a greater understanding of what the purpose of context is.  Doing it everyday solidified the skill and provided a basis for what they need to improve.  There is still a lot of work needed in this area.  But overall, they are doing well and I am impressed with them for as early as it is in the school year.

There were numerous checks for understanding on their content.  I felt they are still some gaps and I need to address those next week.  They are having trouble understanding the trade routes and their connection to the growth of empires.  Other than that, the students are demonstrating an impressive depth of content knowledge of the classical era.

Now to the thesis.  That was a low point last week.  I gave them similar conditions this week and tested what they could do.  It was so much BETTER! There are some errors still occurring.  Some kids need some one on one attention.  Others made simple mistakes such as forgetting the time period.  But it was a lot better.  I uploaded three examples for you to sample.

My biggest takeaway: I need to spend the time where it is needed.  I know that sounds simple.  But it is hard on the day to day to remember that.  I can manage the macro scale when looking at the whole year, but it is hard for me to stay focused when it feels I “covered” it or am spending significant time on something.  I know they need more work on thesis statements, so I need to spend the time on writing thesis statements.  Writing is over 50% of the AP exam and it is a skill that will transcend the course.  I need to address my instruction on the biggest needs.  Those biggest needs come from the feedback the students giving me.  That feedback is telling me to spend more time on writing.