One Year in AP: Do Grades Represent Mastery? (Week Twenty-One)

This week the content focus was primarily on Atlantic Revolution from 1750-1900. Here were the standards for this week:

Max and Devin volunteered to document their learning and reflect this week.

Here is what Max had to say. 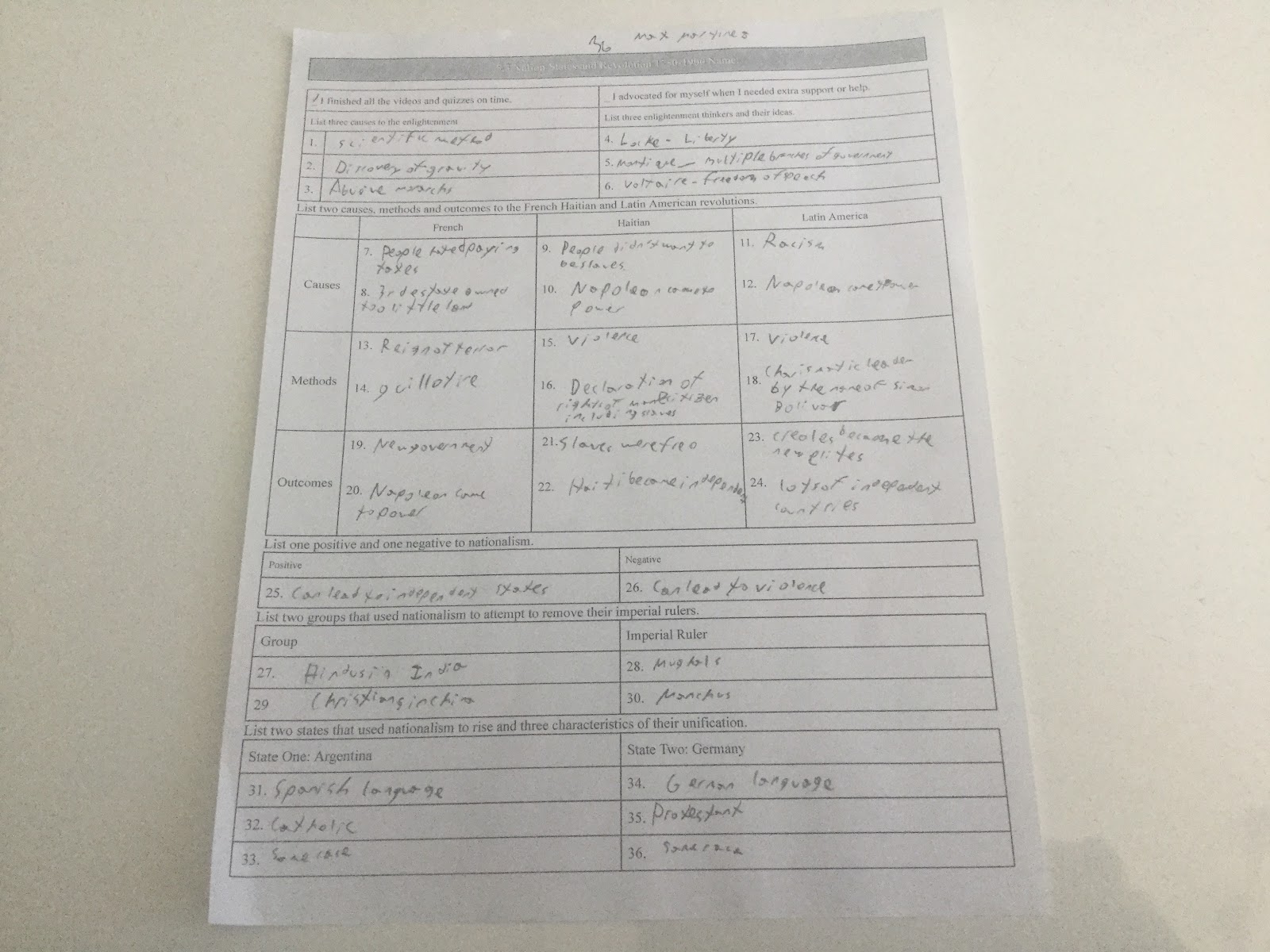 A perfect score on the quiz we took in class on the given topics. 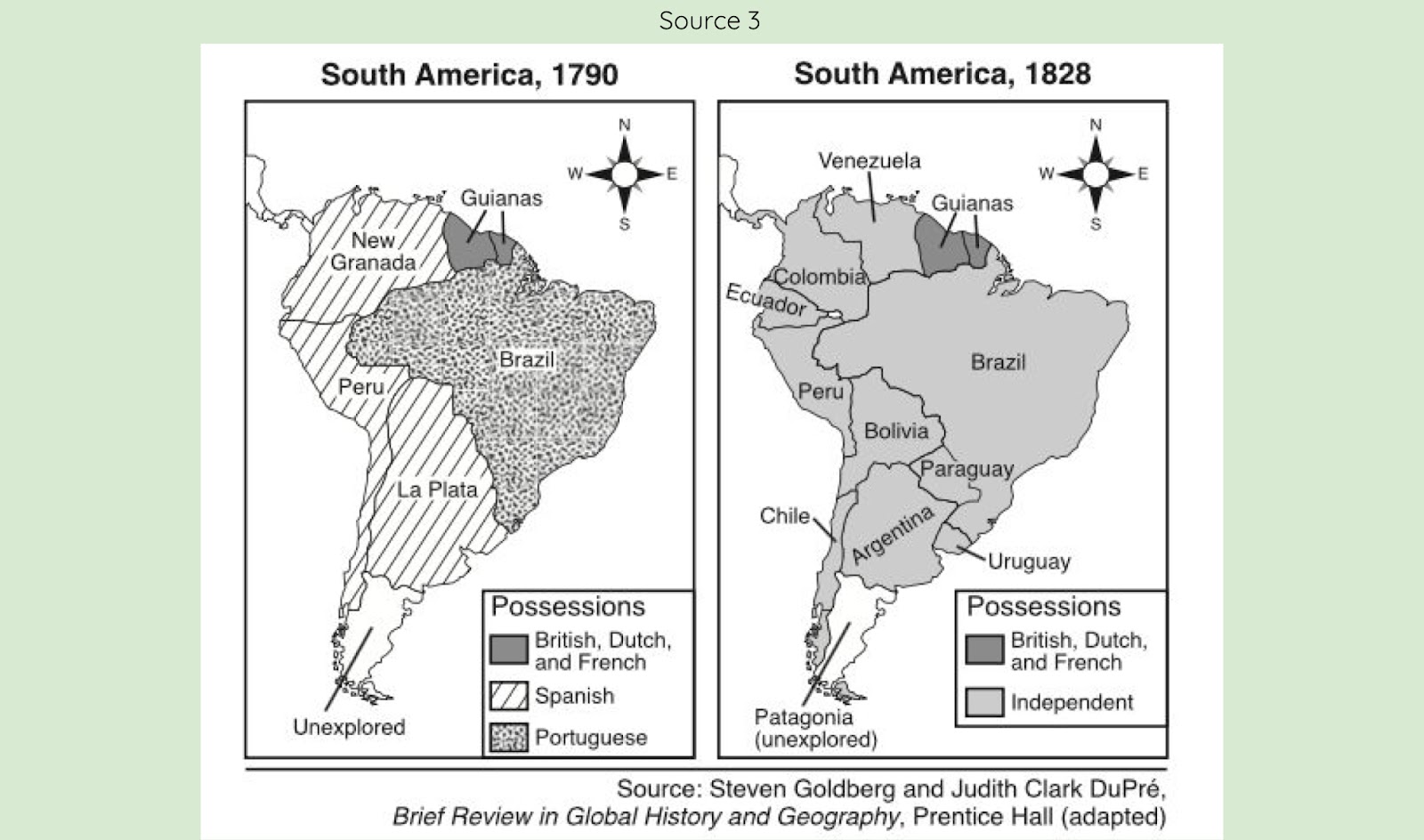 This is one of the documents we studied about the Latin American Revolution.
Reasoning- This demonstrates mastery of the given topics. A perfect score means that everything was right, which clearly demonstrates mastery. The second image is of a thesis and contextualization paragraph for a DBQ we did in class. This helped me understand the French Revolution, which I did not know much about prior to the class as we mostly learn about America in lower grades. The third image is of a document from a DBQ about the Latin American Revolution. As with the French Revolution, I did not know much about the history of Latin America, but I do now.
Here is what Devin had to say.
Evidence 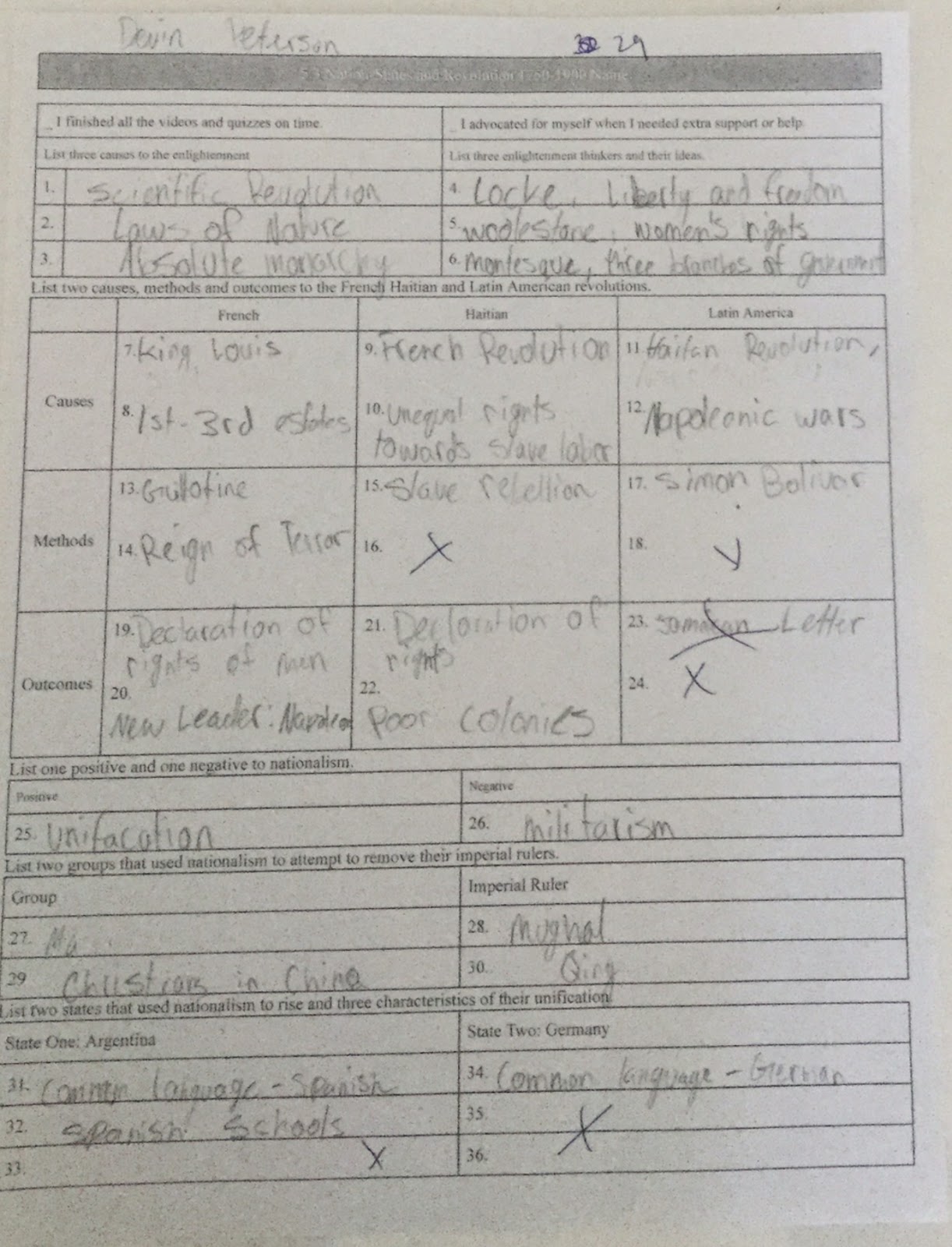 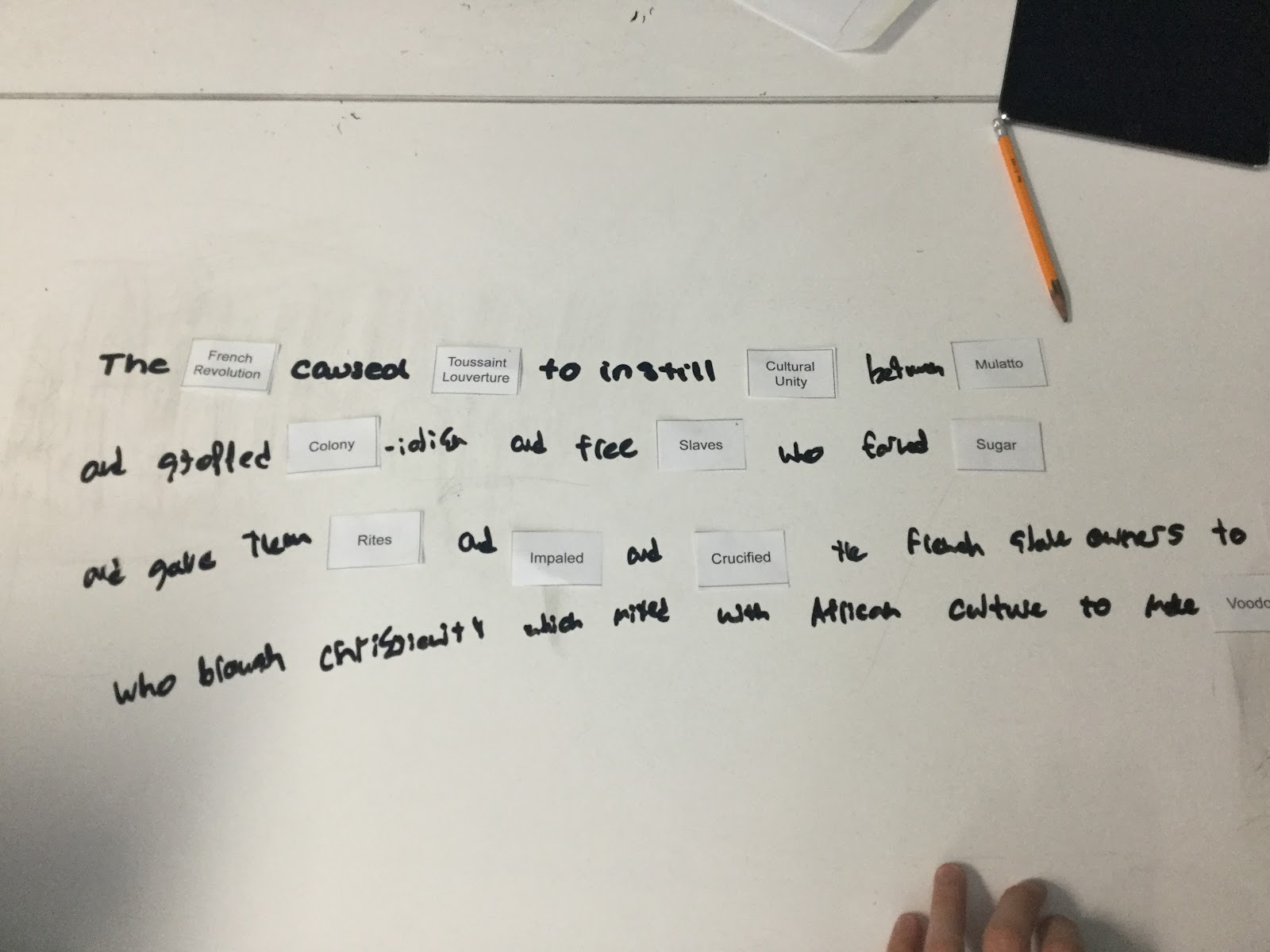 We used new vocab words to write sentences about the Haitian Revolution. (Picture 2) 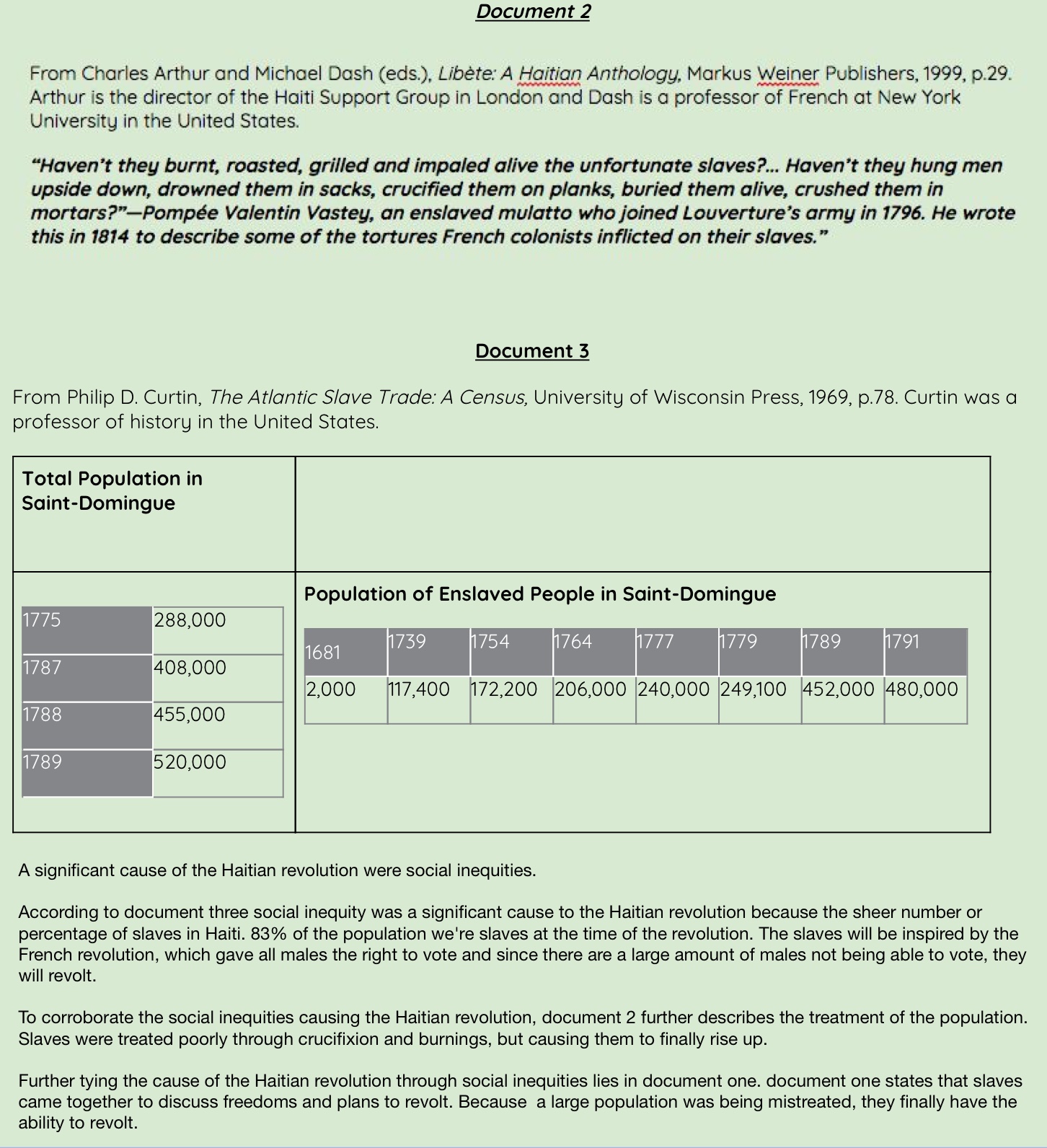 We wrote a DBQ based on documents about the Haitian Revolution. (Picture 3)
Reasoning
My current grade in this class is an 80.55%. This is because at the beginning of the week I was not understanding the material fully, this is shown in picture 1. Throughout the week though, we talked more about the French, Haitian and Latin Revolutions. Because of this, I know I fully understand the material represented by picture 2. We also practiced writing while using the topics represented by picture 3. These helped me understand by just reviewing the topics more and using interactive activities. I didn’t know too much about the Haitian Revolution until we learned about it and wrote with the topic. Every activity helped some of them were more fun than others, but I now have a full understanding. The third image used documents to help you write the DBQ. In this, you have to contextualize about before and during the topic. Learning more about the French revolution helped me write more context and also get me an A currently in AP World History.

Typically the week goes by in a blur and I love seeing the visuals the students picked for evidence as and a rich source of reflection. Each student has his or her own personal narrative and experience.  Reading their work is a small glimpse into that experience. Since I do not write this blog until the following week, the pictures and their narrative have been enlightening into their point of view.   For instance, Max used different documents and different writing components than Devin.

I love how each student included the primary and secondary documents beside their writing.  I don’t always include the actual source information in the blog.  Seeing that pairing it increases my understanding of their understanding of the skill.  As I read their reasoning, I think I need to be clearer in my expectations.  I want them to analyze each component of their writing.  I wish they knew what mastery looked like, to the point they can compare their own to that of mastery.  I will be asking next week’s students to do that.

Each of them selected the more formal assessment for evidence on their content knowledge. I really like Devin’s evolution of his understanding.  It took a while to get to mastery, and that is something I value.  I want them to master it, and the timeline of mastery is flexible.

A concern of mine is their use of a grade as a metric of their mastery.  I keep seeing that students equate mastery with grades.  I hate putting grades in the grade book early on in the semester because it can really influence how they view the course.   However, it is hard to communicate to students and parents that students are making progress on something that will not be formally assessed for weeks. Like last semester when a student thought things were going well and then got a grade they thought was inferior.  It forever changed their point of view on the course.  I need to work on getting students to understand mastery and how to communicate that better to them.