One Year in AP: Getting Back to Writing (Week Twenty-two)

This week the content focus was primarily on the Industrial Revolution from 1750-1900. Here were the standards for this week:

Nicole and John volunteered to document their learning and reflect this week.

Here is what Nicole had to say.

Nicole: The first day of the week, we were asked to write 7 reasons why the revolution occurred. At the beginning of the week, I was skeptical and confused about the topic even after the checklists. I was working with a partner on this activity, and I came up with a couple of reasons. 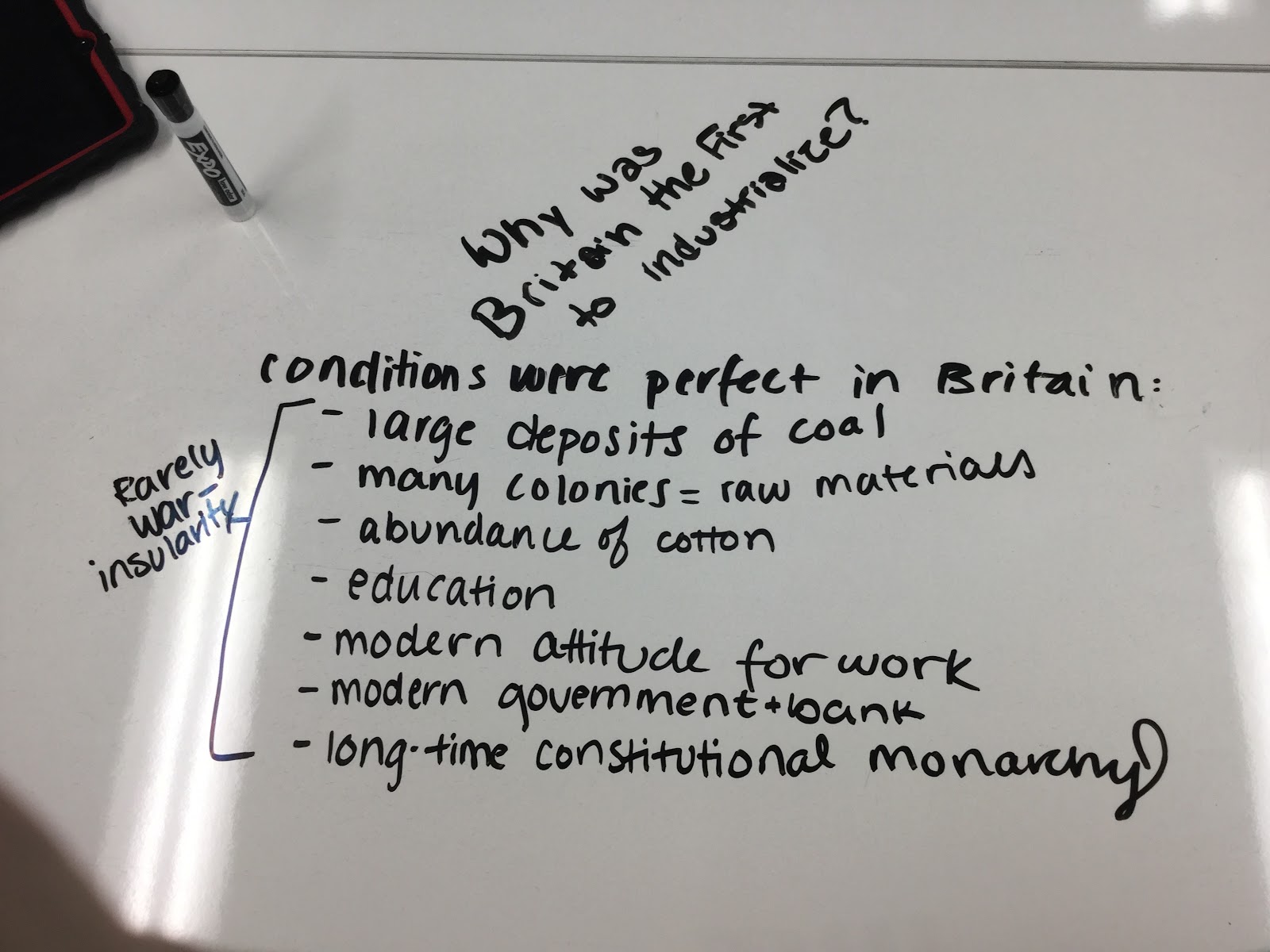 Linda Ashida came in and filmed part of the week.  She pulled two students aside to reflect on the learning process, and Nicole was one of those students. The video clip offers a great snapshot of her point of view on the writing process.

Nicole: With background evidence from checklists, we were able to list these reasons off. Additionally, with the prompt that was given to us, we were able to shave down these reasons to why it started in specifically Britain. Personally, I found this very helpful and it cleared some things over the weekend. It was a good refresher on the causes of the revolutions.
The second day, we were introduced to The Urban Game. 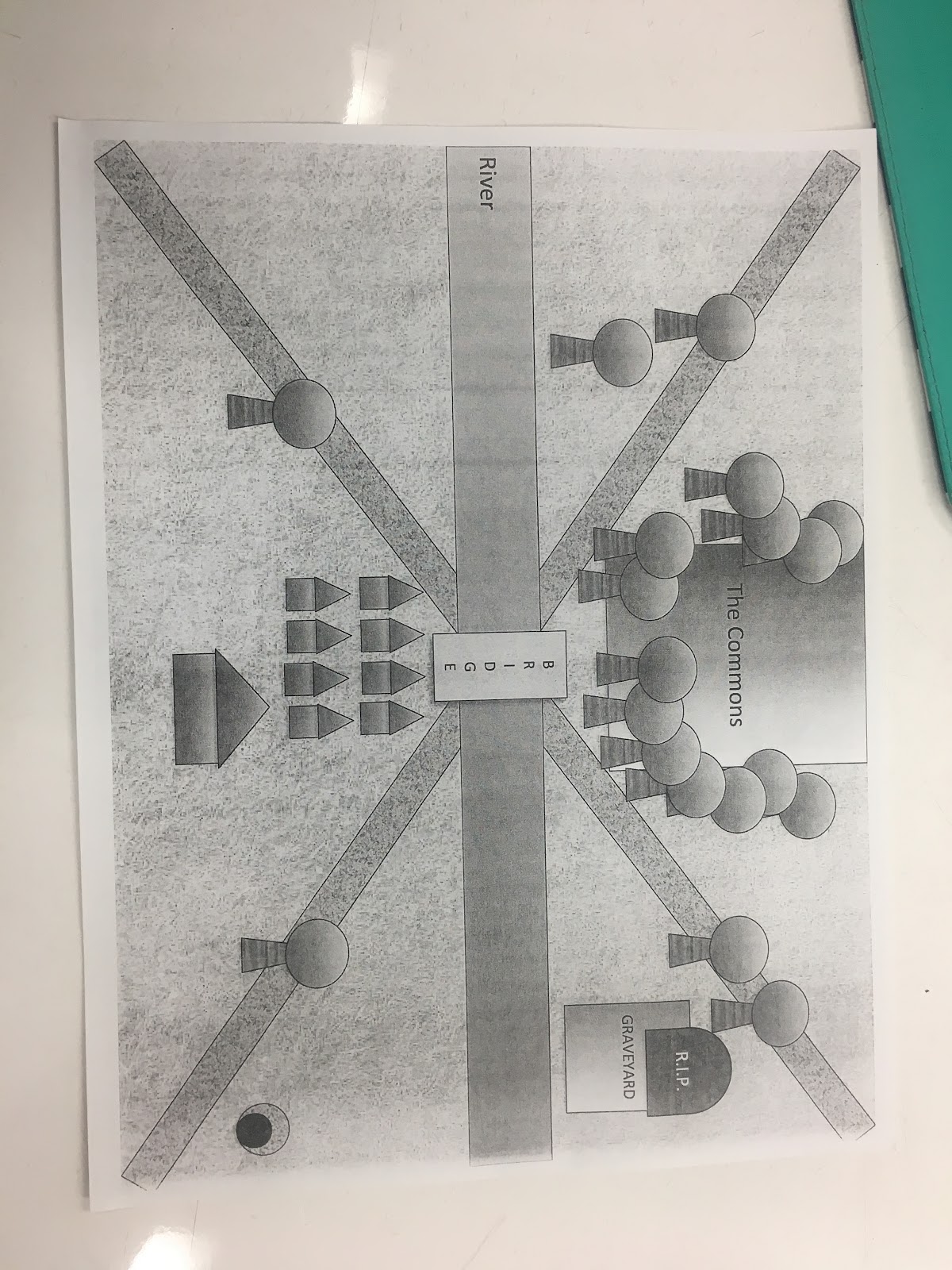 Nicole: I’m pretty sure most kids believed that this was a very fun way of interactively learning the urban ways of a small town. It was a bit of a long process but I enjoyed it a lot, so did my partner and most of the people in the class. It also came with a cause and effect chart that we filled out along with filling in a sheet that ended with about 90 houses, factories, roads, and bridges. It was a fun project but maybe about 8 students out of our class didn’t see the point of doing it. They didn’t see how it connected to the lesson of the week. Overall, we did enjoy it.

John: We were asked to write 7 reasons as to why the Industrial Revolution occurred in England from a document provided. 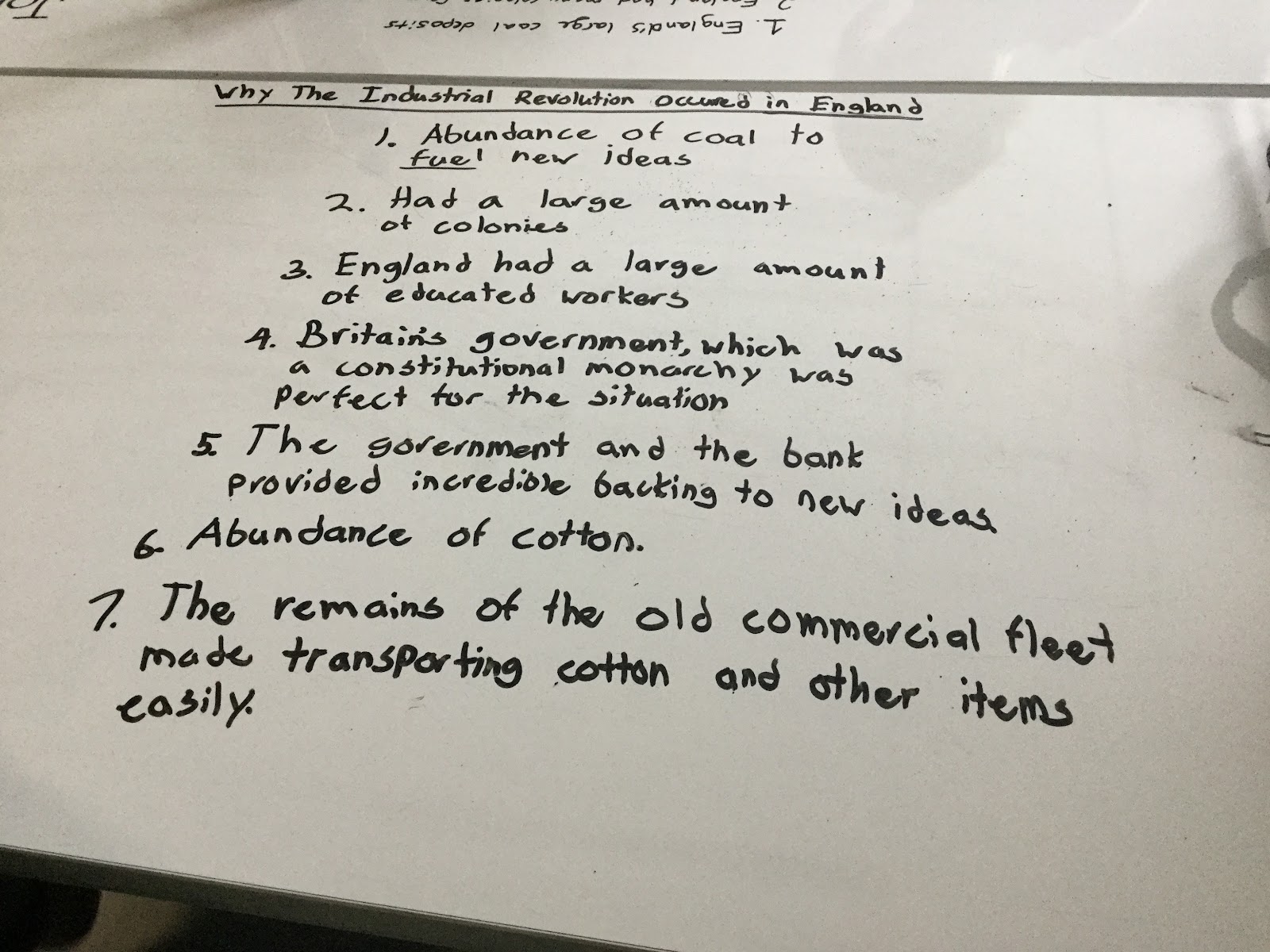 John: Mr. Heintz actually had this printed on a piece of paper and cut the paper into each of the stages.  I was able to successfully provide an example for Stage 1.  Stage 2 happened to be a little tricky for me.  It could have been because the activity wasn’t explained correctly but also from my part.  I tend to overthink simple tasks sometimes which does get in the way of things.  I felt the idea of the activity was good but I don’t think it was presented in the most effective way.

John: Read the stations, draw the changes on the paper provided and list the causes and effects which was in a separate document. 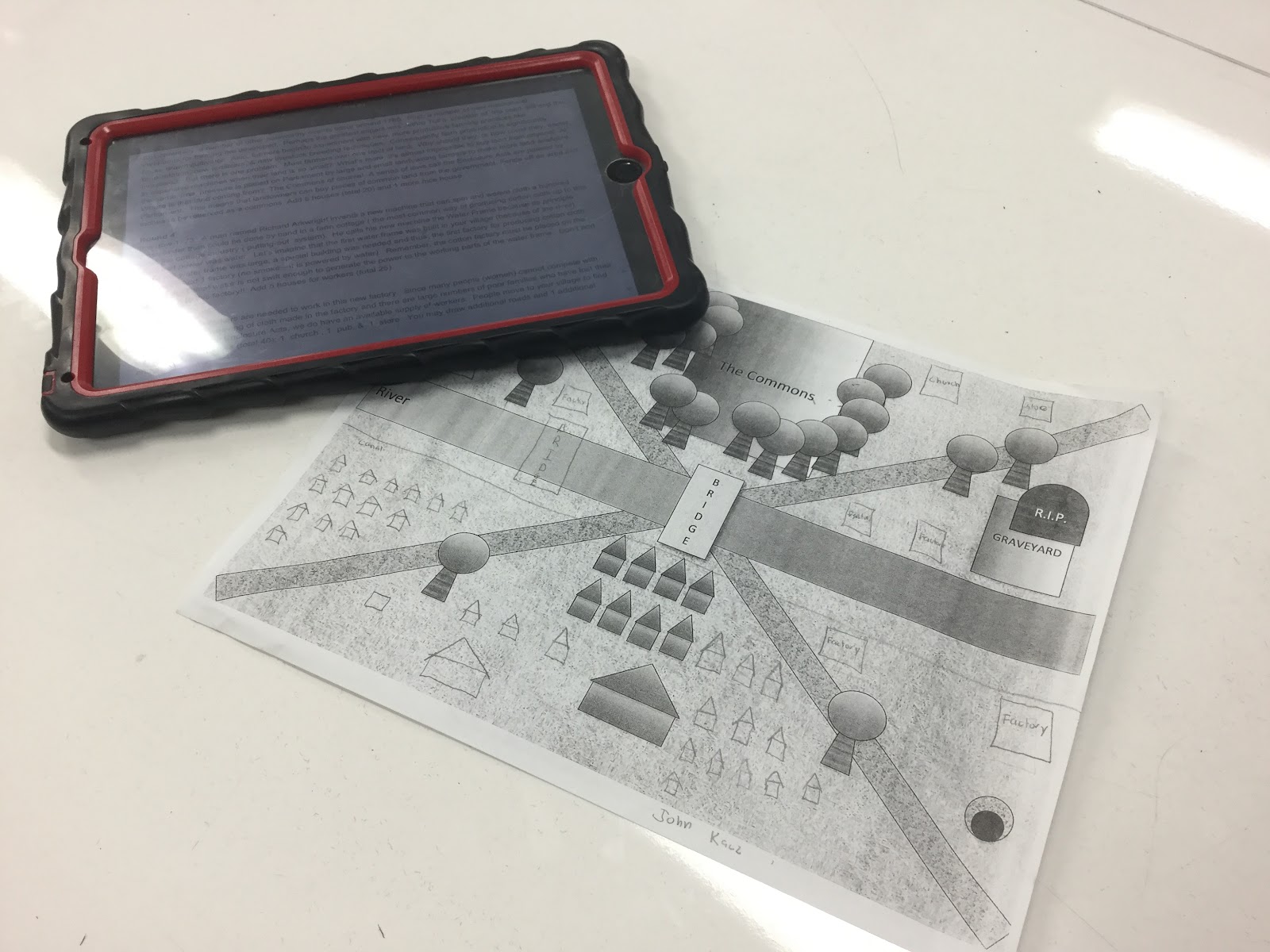 
John: There was a substitute today.  We were told to work on an “Urban Game” activity.  The game consisted of twenty rounds and a cause and effect chart for each round. This activity was a bit longer than the preceding activities but it showed how England was able to industrialize.  By the end of the game, the entire sheet of paper was filled with houses, factories, railroad tracks etc.  There were a change and effect for each round.  Herra and I both worked this, I had the change and effect chart opened while she had rounds opened on her iPad.  Aside from the game being a bit lengthy, the activity itself helped show how England industrialized and the effects of it. By Mark Heintz
Evidence 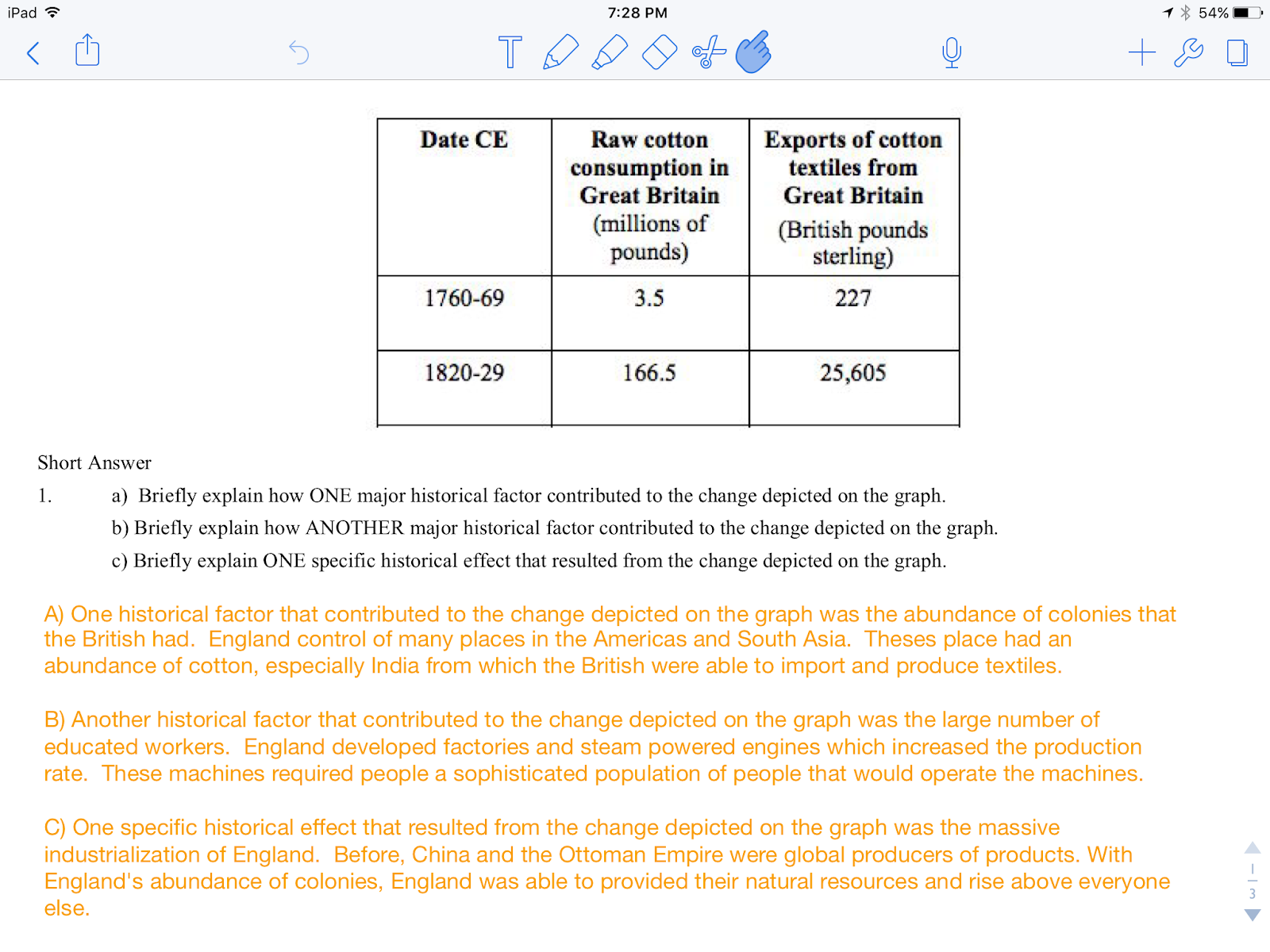 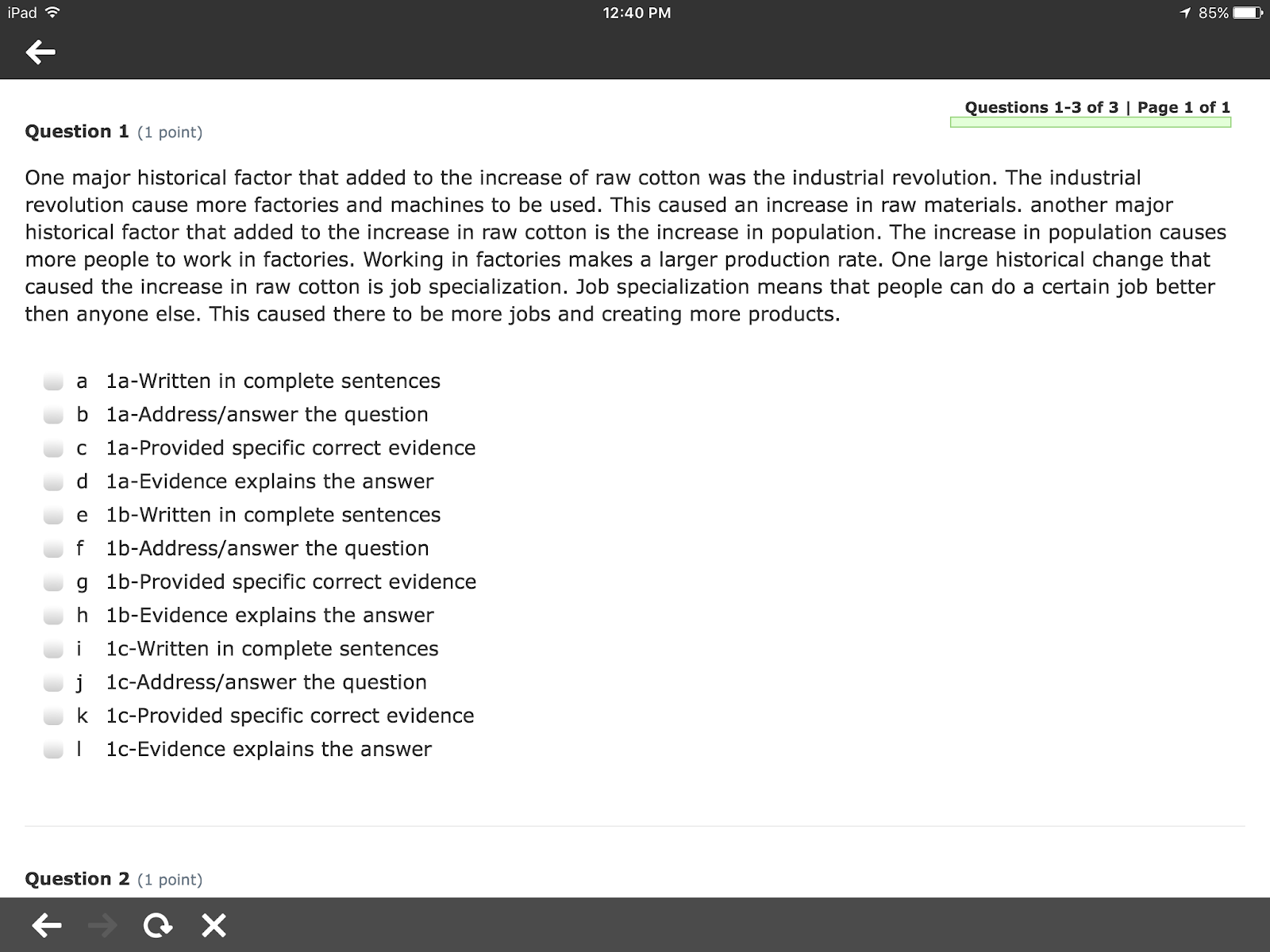 John: This was the checklist that is supposed to be worked on throughout the week. 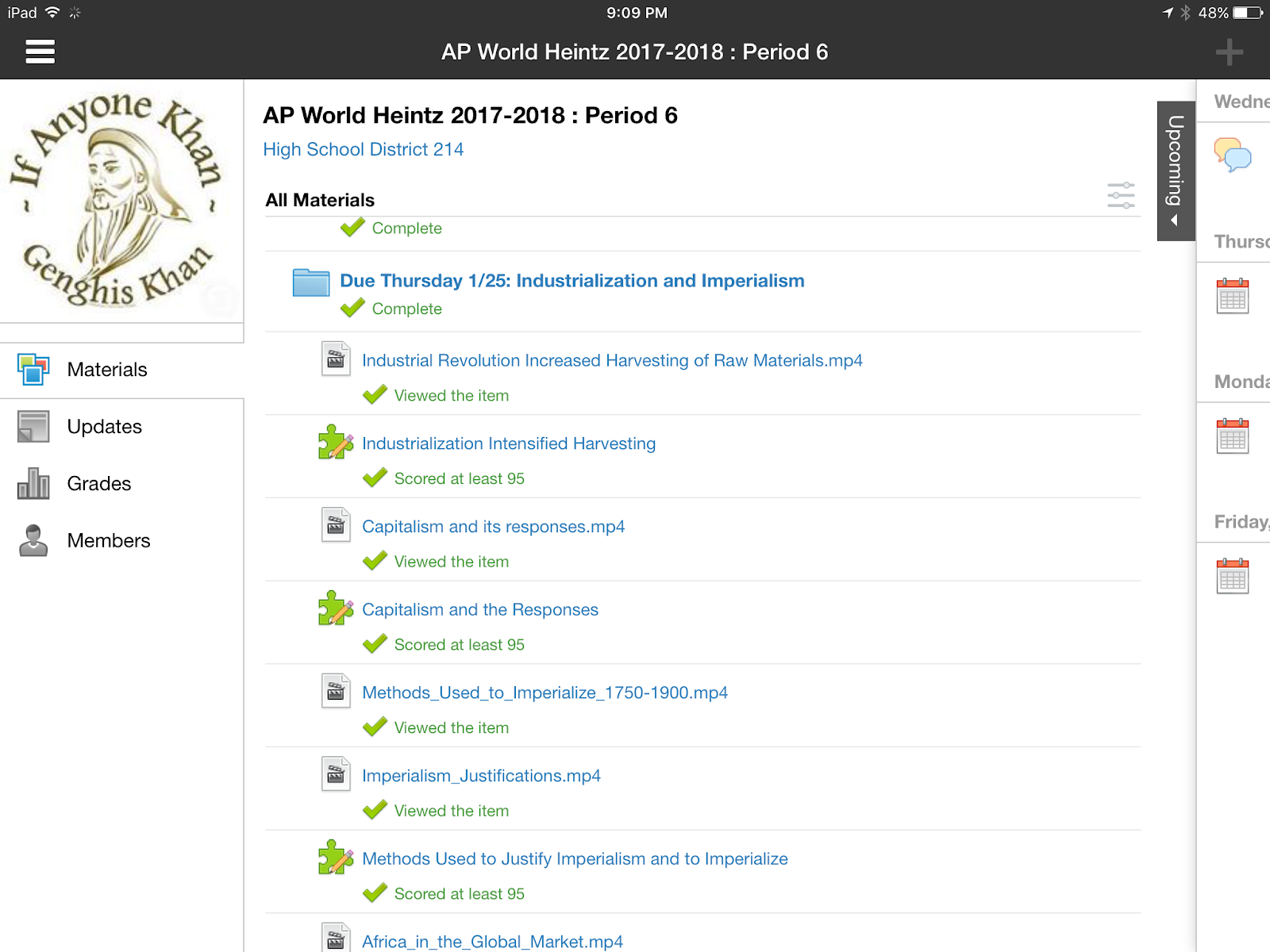 John: This week’s folder focused on Industrialization and Imperialism.  The assignment to me about thirty minutes to compete.  The checklist asked for at least 95 percent on the quizzes but I would like to get a hundred on each.  Getting one wrong signifies that missed 3-5 percent of the skill.  By doing some of the quizzes over really helps me solidify the information.  Sometimes the questions are repetitive.  I feel that if stimulus question were integrated into these quizzes then it would help us prepare for the AP test in May.

John: The Industrial Revolution in England, the causes, and its effect were easy to grasp considering that the Industrial Revolution was covered in previous years.  The effects are self-explanatory in many cases.  The checklists for the week really help me understand the material better.  I’ve learned that doing the checklist ahead benefits me because all the material in the checklist folder is covered during class. I remember that with England, abundance was the driving force of their revolution and from there I’m able to give effect E.g, the abundance of coal lead the way for better machines to be constructed.  The large population of people was able to work these machines, especially the educated ones.

My Reflection and Impact
There is a lot to reflect on this week.  After reading the student reflection, I am concerned about the effectiveness of the content checklists they do on their own.  Nicole’s commented, “At the beginning of the week, I was skeptical and confused about the topic even after the checklists.”  Ideally, I would like the checklists to serve as a foundational point of the content.  I have recently been contemplating getting rid of the mandatory checklist.  Even though she later articulates that the checklist enabled her to recall some basic facts, I still question the mandated curriculum.  The outside-of-class work is teacher-driven and not focused on student exploration.  This topic is more likely a full blog post at a later date.
Nicole makes a statement about how the Urban Game was fun and interactive.  However, she highlights that the class did not have agency behind it. Student agency is becoming a central theme running through my head and one of the reasons for debating the nature of the checklists. She stated that some students did not do it.  I was not present in their class that day and that could have been a reason for them not completing the task.
I am happy that Linda came in to film because Nicole did not document her understanding of the writing and reading understanding.  Despite having analyzed a number of documents and writing about each of them, there was a little reflection.  John did concern himself with some of the writing, but not to the extent that I would have liked.  He did highlight a concern over the lack of time spent on the Short Answer.  That is/was a conscious choice because it is a skill they work on throughout writing the DBQ.
Overall, I would like the students to focus on the writing more.  That is something I need to express to the new students who document their learning each week. I need to be intentional about how their feedback impacts instruction and my message to the class.
Read week twenty-three here.