A Year in AP: Student Feedback and Reflection (Week Twenty-seven)

This week the content focus was primarily on land-based empires from 1750-1900. Here were the standards for this week:

First, how do I know that the students know the content and how to do the skills?
This semester, I am including, or trying to include student’s perspective on the week.  For this week’s post, I asked two students to document their learning on the standards.  It was a great week to do this, for I missed two days this week due to a family emergency.  I shared a Google Doc to document their progress.  Each day,  I looked at the shared document to view their understandings of what took place during the day.
Kunal volunteered to reflect on the week. 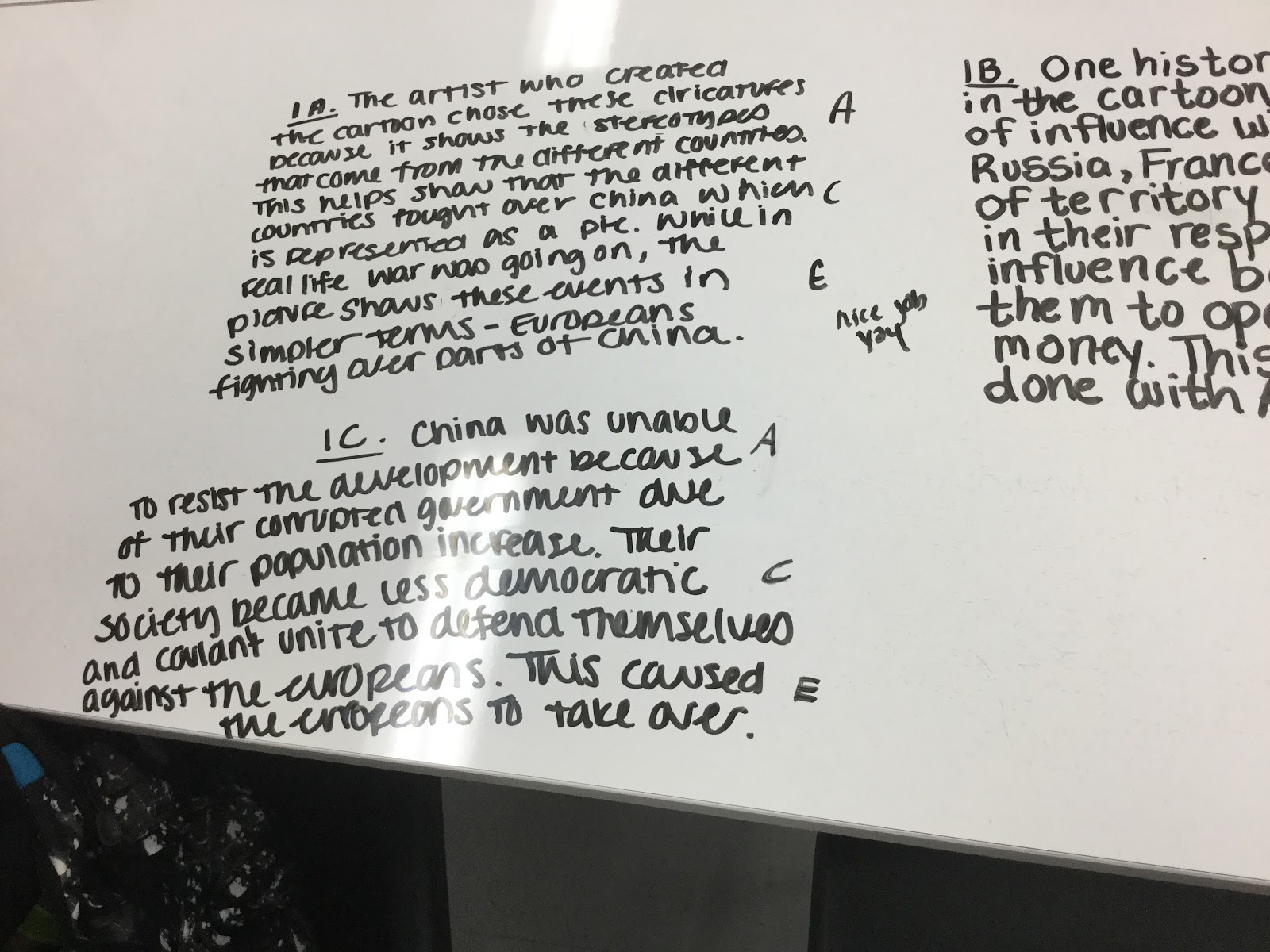 Kunal: On Tuesday of this week, we brought back some skills that we hadn’t focused on for a while: writing a short answer and answering stimulus questions. I’m glad that Mr. Heintz decided to revisit these two important parts of the AP test because all of us need to keep practicing them to be prepared for the showdown in May. After doing the particular activity our group of two was assigned, we rotated tables and gave each other peer feedback, giving us the chance to see how others went about answering each question. 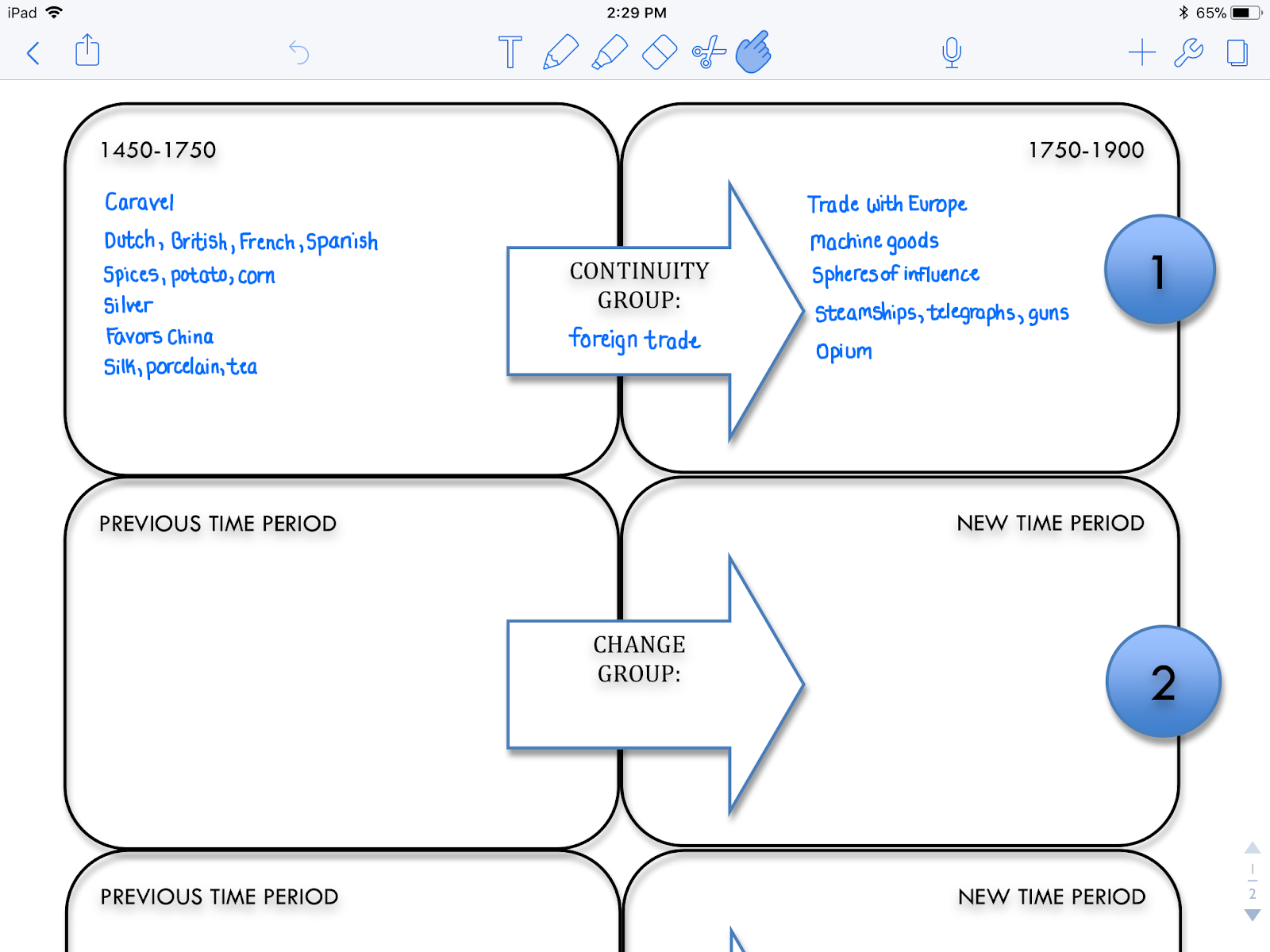 Kunal: For me personally, I like it when things are organized in a chart or enhanced through statistics or pictures; I am a visual learner. Today, we organized all our knowledge of the Qing Dynasty and primarily focused on the continuities and changes from 1450-1750 and from 1750-1900. This activity allows us to actually understand how Qing China is being impacted by global processes/outside forces and can be very helpful in our writing. 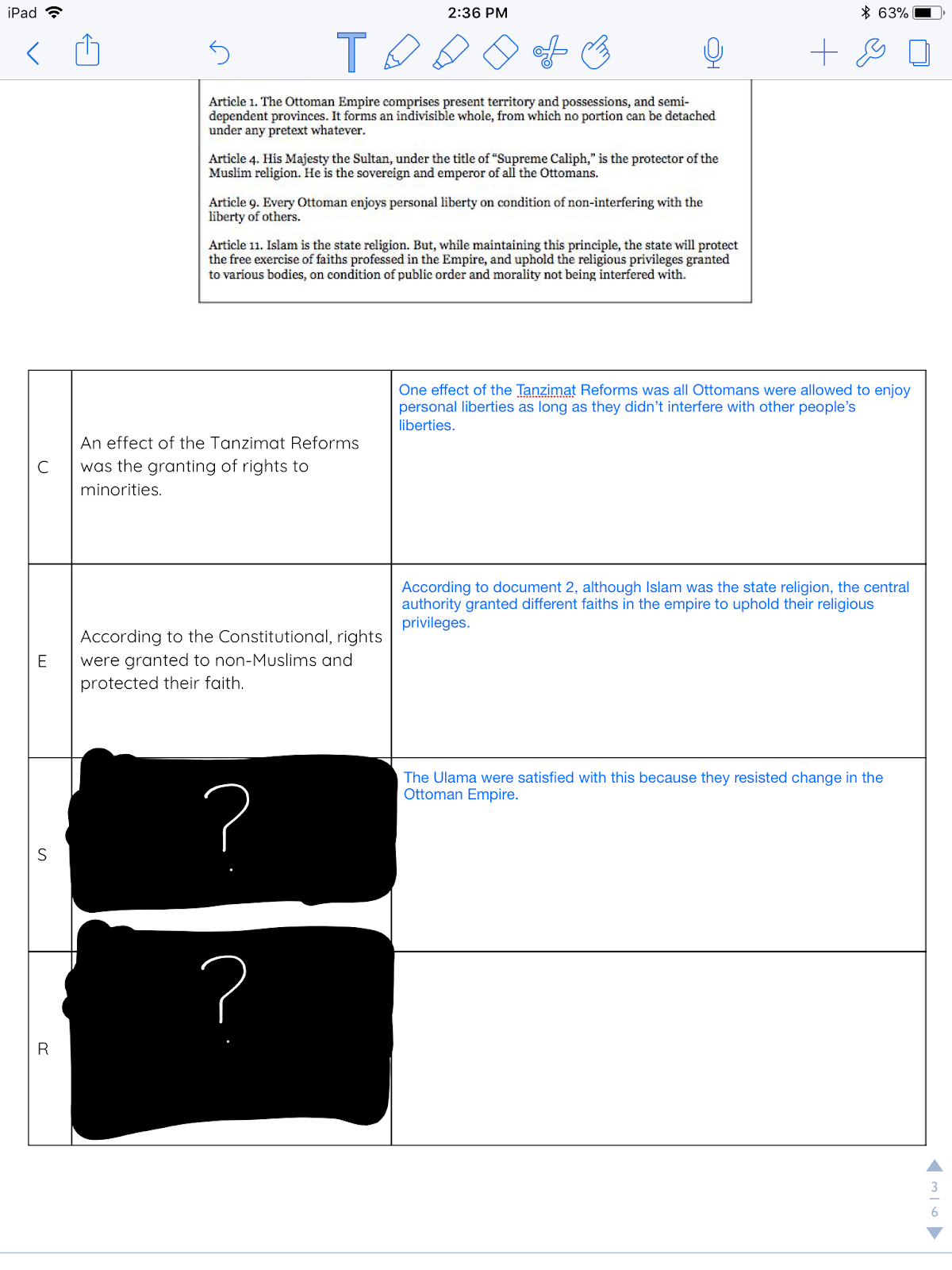 Kunal: I LOVED this writing practice we did in class today!! For this, we had to analyze the effects of the Tanzimat Reforms in the Ottoman Empire from 1750-1900 by providing three examples of reform movements and resistance to those reform movements. We were given five sources/documents to analyze and to implement each of them into our argument. Each paragraph had to be a minimum of three sentences and had to have a claim, evidence, outside source evidence, and solid reasoning. What I like about this activity was that we got instant feedback, instead of having to wait until Mr. Heintz came over or until everyone was done so we could go over it as a class. For example, after writing the claim for a source, I used the eraser tool in notability to see what a good example looked like, and I could then compare mine to the one underneath the question mark. Another good thing about this activity was that it was timed; each paragraph needed to be written in four minutes. Although being under time pressure was stressful for many, now is the time to simulate the AP exam. I am someone that likes to take my time, but time is of the essence! 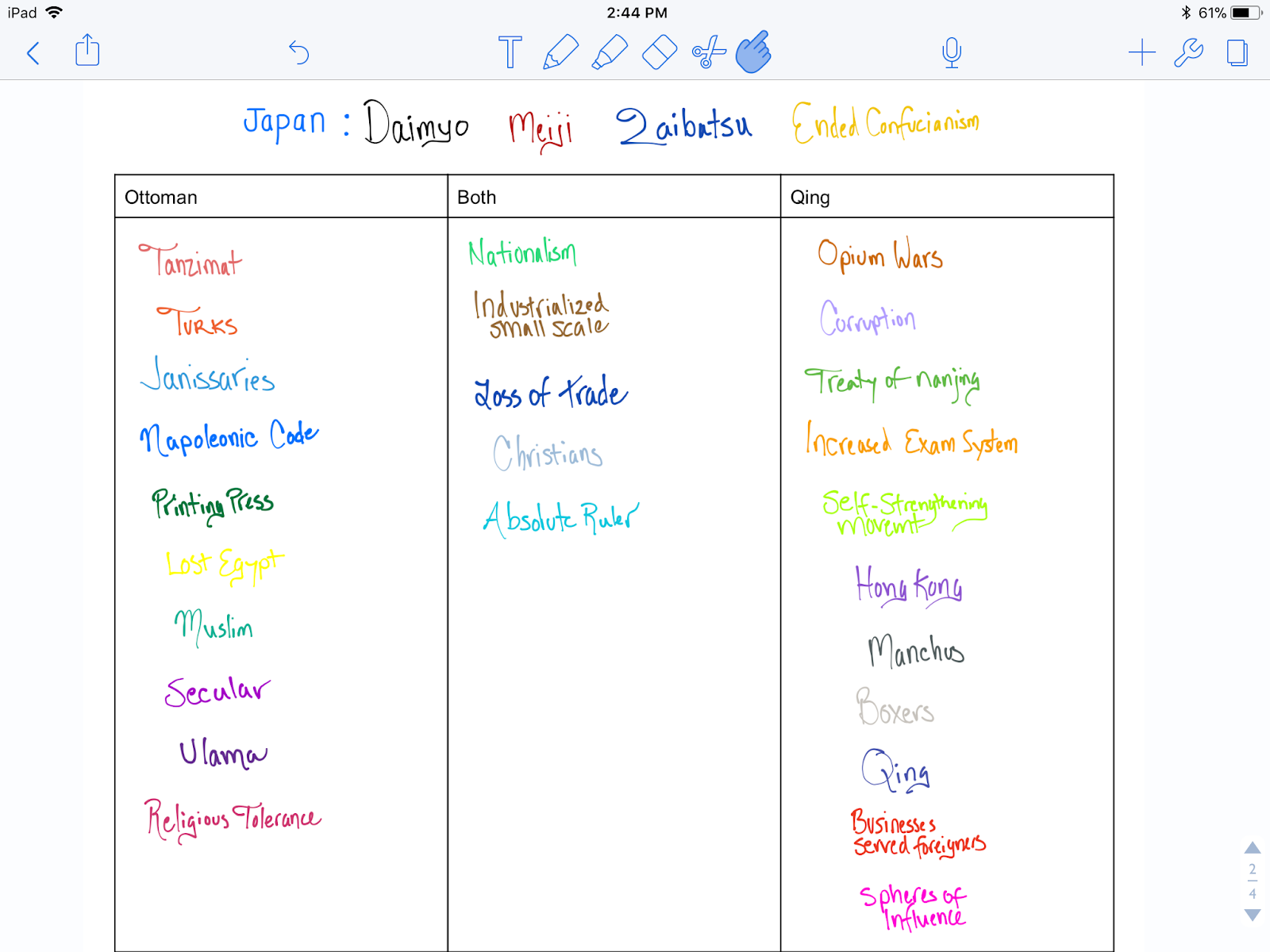 Kunal: On Friday, we used the scissor tool in notability and dragged each word provided under the heading it belonged to. (Was it the Ottomans that did this? The Qing? Or was it both?) The ones not in the boxes applied to Japan. After we finished, Mr. Heintz had someone Airplay the answers and we discussed why each word went where it did. Sometimes having to recall all the important information about each empire, place, etc. can be challenging, so this was a great way to review content! (Plus, I really have enjoyed this particular activity each time we have done it.) 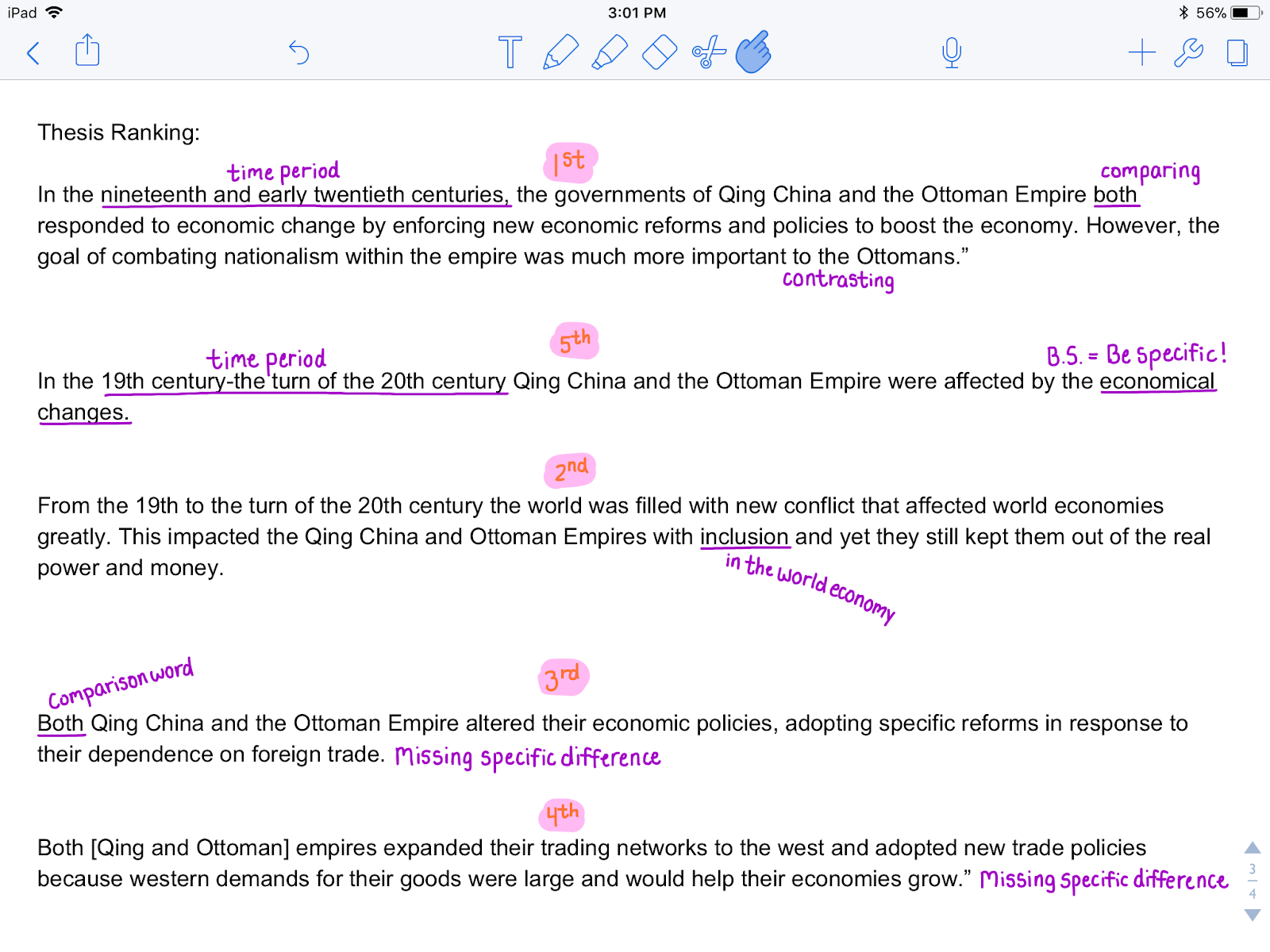 Kunal: As a way to wrap up class on Friday, we looked at student-written examples of a thesis to be exposed to great and not-so-great examples. Our goal was to rank them from 1 to 5, but to tell you the truth, a lot of people were off task. This frustrated me 🙁 and a few others, and led to Mr. Heintz giving the class a lecture on behavior and talking about how each of us was responsible with taking the initiative to prepare for the AP test in May. We lost a lot of time that day… The class needs to stay more focused moving forward!
Reflection and Impact:
There is a lot to unpack this week.  First, Kunal highlights the revisiting of some older skill sets and continued use of peer to peer feedback.  One of the goals in writing this weekly blog is to get students to know if they know how to do a skill set.  While that is a goal, it is good to see that the students value peer feedback. Having them give feedback to each other that is meaningful and accurate is always amazing.  Furthermore, my hope is that they don’t need my feedback to validate their progress.
Later in the week, Kunal stated, “What I like about this activity was that we got instant feedback, instead of having to wait until Mr. Heintz came over or until everyone was done so we could go over it as a class.” I LOVE the activity because they do not need me as much. They can read the model and critique their work. Further reflecting on the day, Kunal said, “Another good thing about this activity was that it was timed; each paragraph needed to be written in four minutes. Although being under time pressure was stressful for many, now is the time to simulate the AP exam. I am someone that likes to take my time, but time is of the essence!” It is nice to see that the students recognize the multi-layered approach to the document analysis.
The students have been asking for more time spent on the content.  Therefore, I gave them the Notability document where they drag the information to a particular area.  It was difficult for the students to sift through the distractors.  At first, the students moved all of the items into a category.  I had to have them pause to see if all of them should be used.  I prefer to use these activities rather than lecture.  Most of the students have been conditioned to prefer lecture because at the moment it feels like they are getting the most direct instruction and revelation. It is a constant battle to have students understanding in what contexts do people learn best.  Unfortunately, that context is rarely lecture. When I do want to spend a particular amount of time on content, I tend to use documents, games, or activities like the one mentioned above.
That being said, not one of my finest moments as a teacher occurred this week.  Students were off task and as Kunal stated, I gave a lecture on behavior.  To be honest, I sort of proved my point about lecture during the lecture, because many students were not engaged in what I was saying.  Also, the off-task behavior was due to a lack of learner agency and poor design of the lesson.  This reflection led me to potentially one of the biggest impacts on my teaching career.  Why am I not involving students in the lesson planning?  Why are they not an integral part of the process? So, I asked my students if they would help me plan.  That is the shift for next week.  The students helped me plan and I am hoping to get them to share their story with me and you.
Read week twenty-eight here.